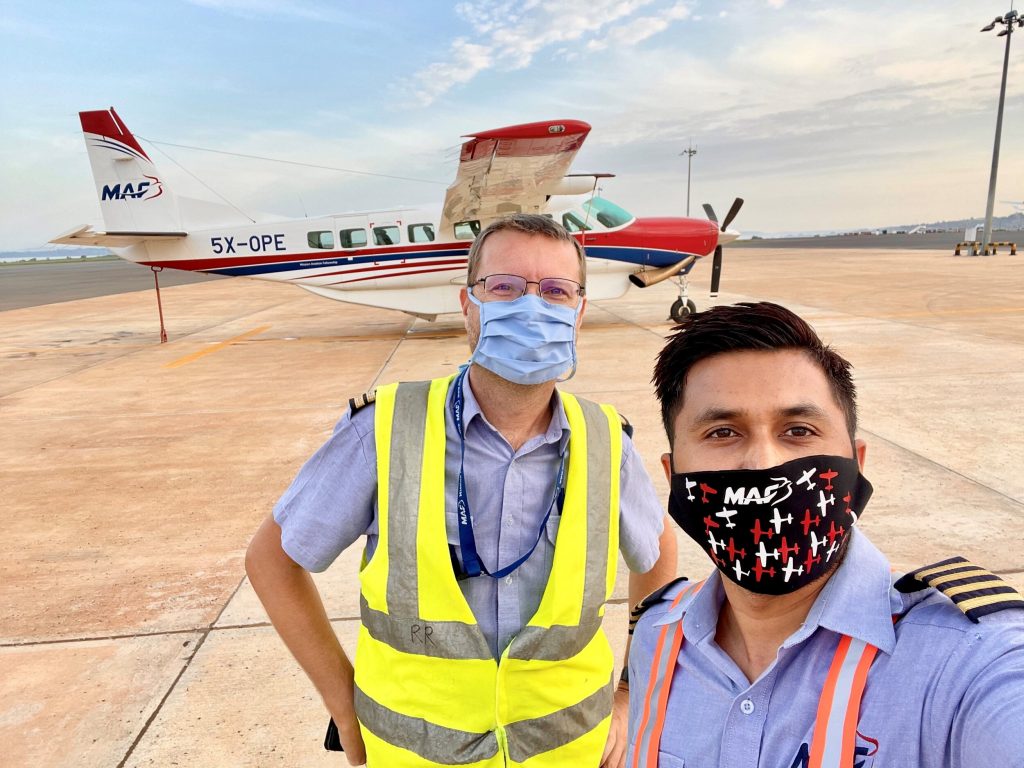 Pilot Rembrand Rodenburg reports the following account regarding his and Ping’s epic voyage flying OPE to Liberia and SCO back to Uganda. Flying over 11 countries. 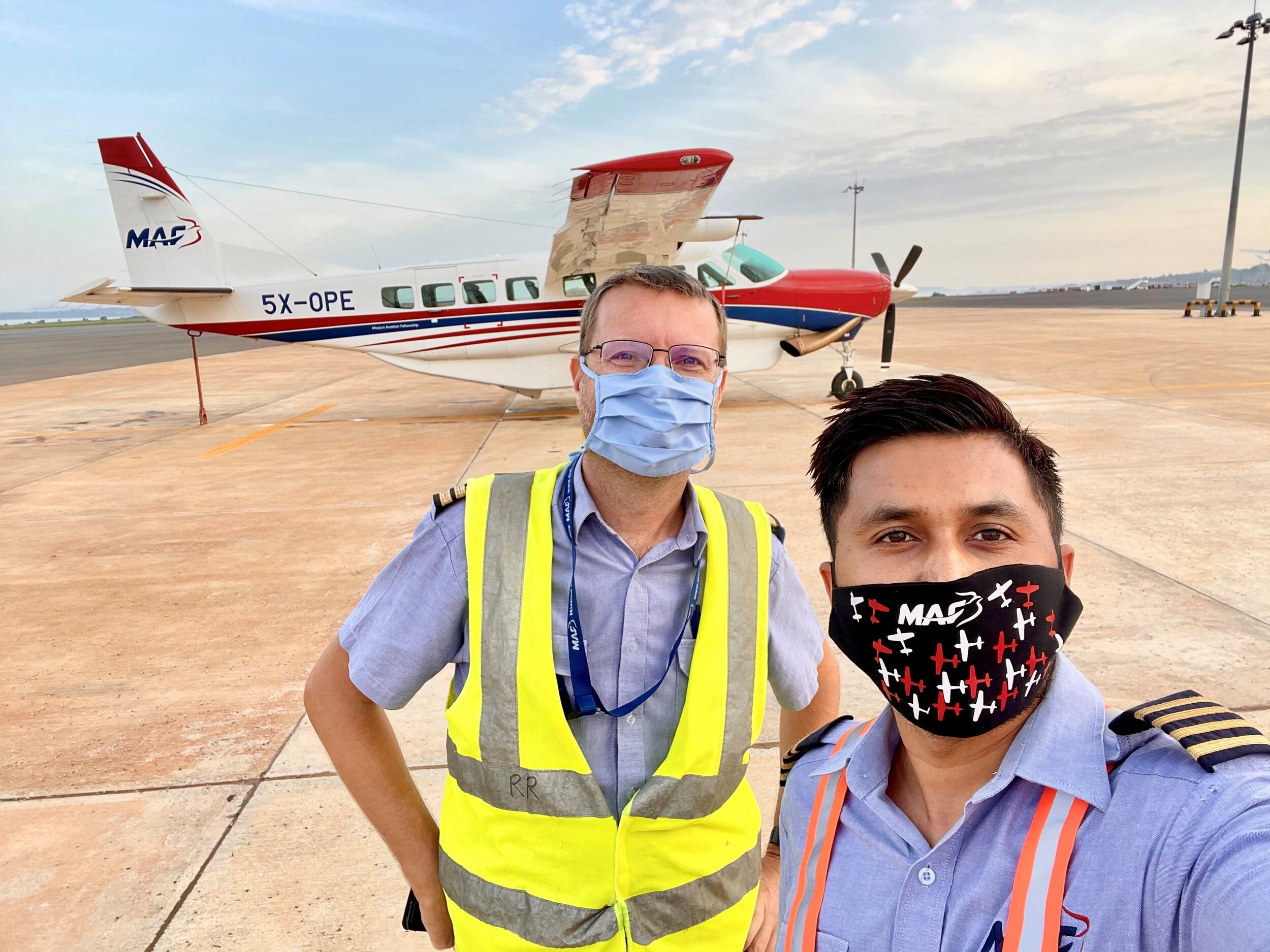 Story and photos by Rembrand Rodenburg, Edited by Jill Vine

Pilot Rembrand Rodenburg reports the following account regarding his and Ping’s epic voyage flying OPE to Liberia and SCO back to Uganda. Flying over 11 countries.

‘Ping and I had the privilege of doing a ferry flight to swap SCO and OPE. The main reason for the swap was the large, scheduled maintenance for SCO. Being one of the newer programmes with only one plane, the Liberia program has managed with only one aircraft and limited on-site maintenance facilities. Due to this, every once in a while (previously in 2018) the aircraft has to be flown to its mother base in Uganda, the country where the aircraft based in MAF Liberia are registered.

The time of the year for the ferry flight was great. Being just north of the equator, February is in the middle of the dry season. Weather turned out to be not a concerning factor this trip. The downside of this was that the visibility was very low due to all the dust. The haze was preventing us to enjoy the views of the 11 countries we flew over to reach Liberia. Uganda, Democratic Republic of Congo, Congo Brazzaville, the tip of Central African Republic, Cameroon, Nigeria, Ghana, Benin, Togo, Ivory Coast and finally Liberia. All together 5000kms one way!  To give an idea: that’s London to Khartoum, Melbourne-Jakarta, Toronto-Anchorage, Los Angeles-New Foundland…etc. 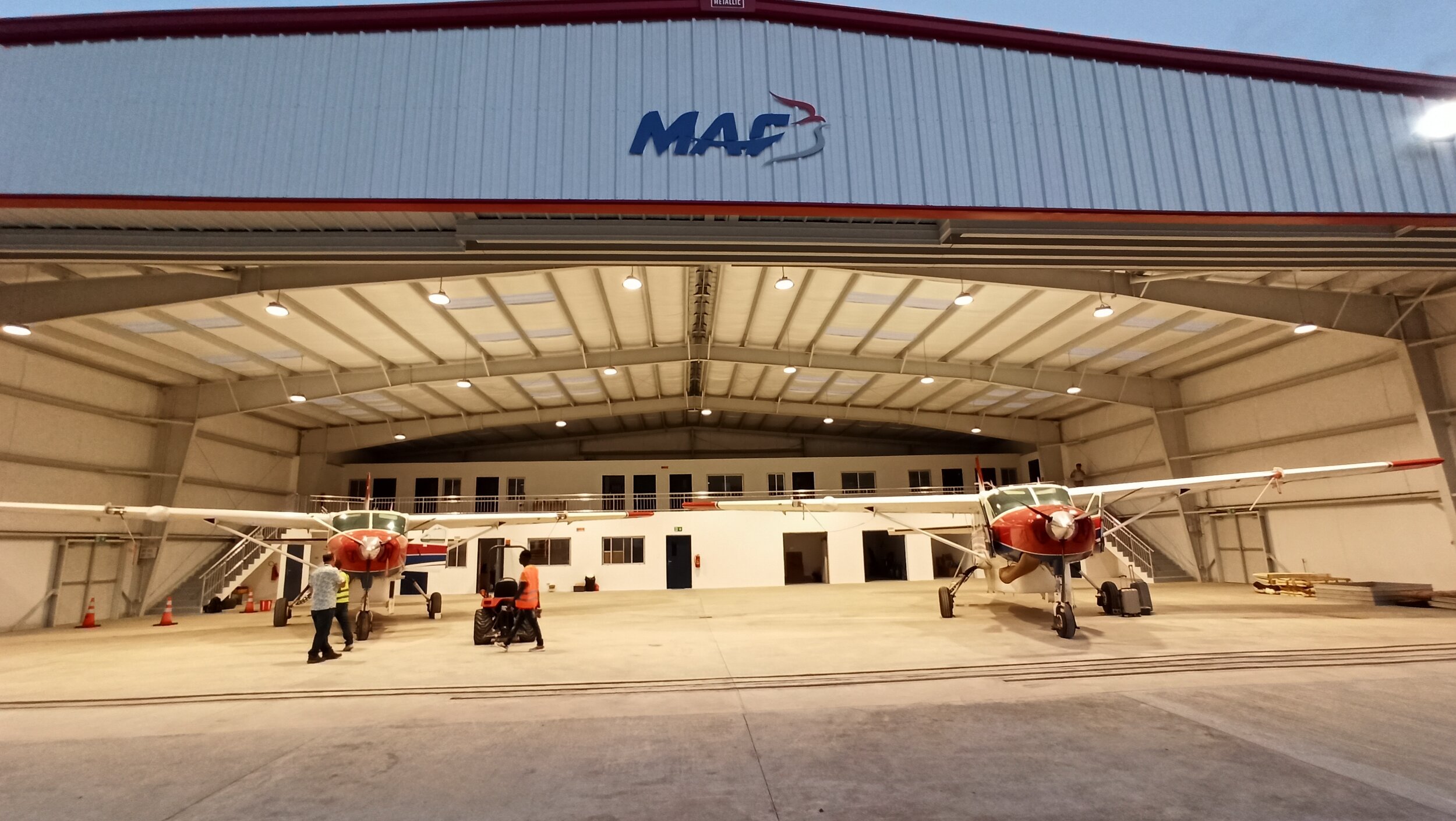 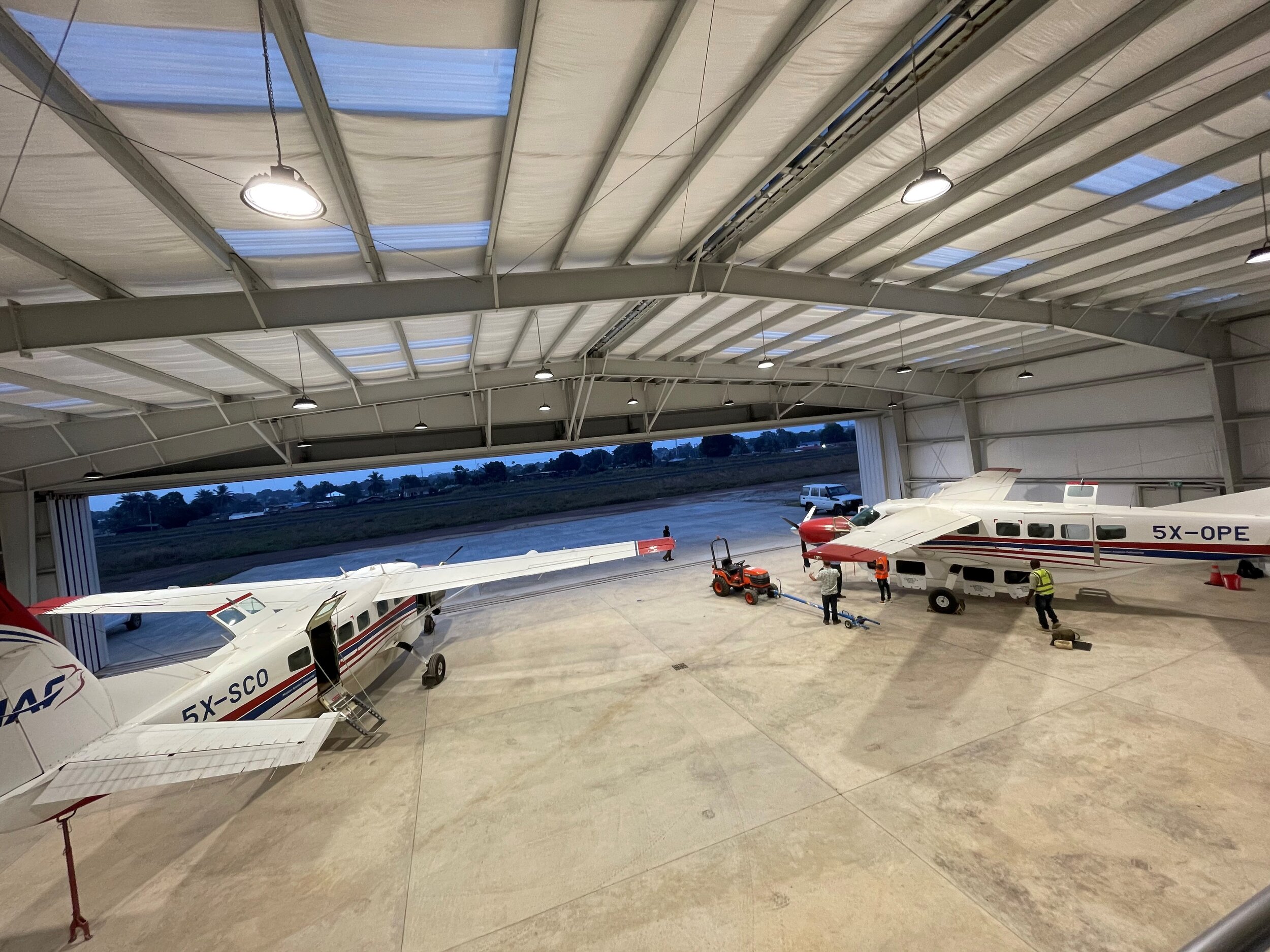 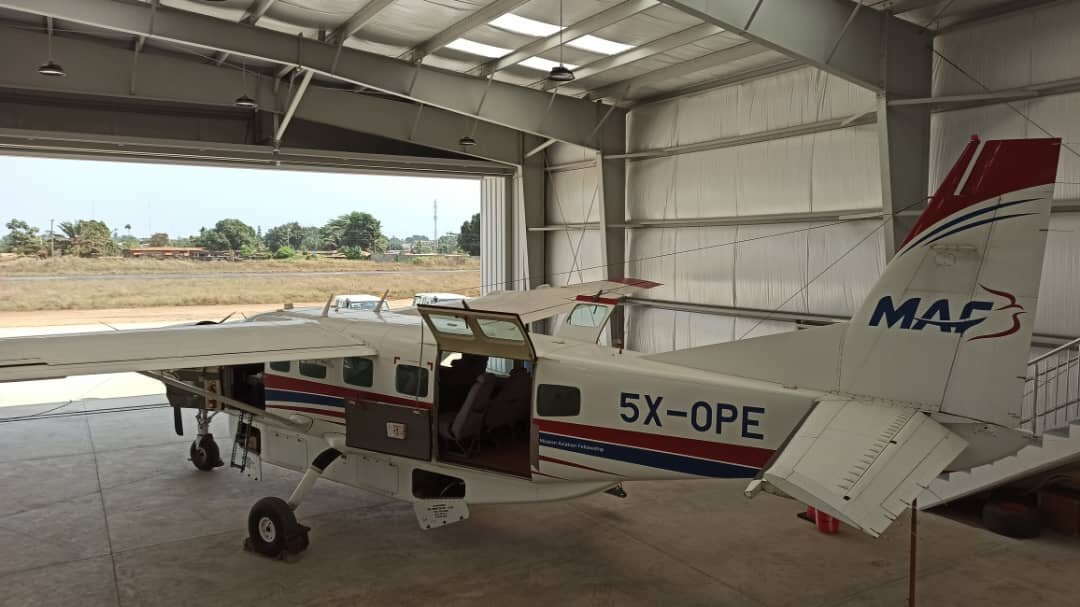 The flight was planned in a record time of about 1.5 weeks, with all the overflight and landing clearances being processed the afternoon before departure. Negative covid tests were obtained, packing for the unpredictable length of time was done, and on Wednesday 3rd of February Ping and I set off for our first stop in Kisangani. After refuelling and formalities, we were off for our first night stop in Yaounde, Cameroon. The second day was a nice flight from Yaounde to Accra in Ghana. The third day was our final leg from Accra to Monrovia in Liberia.

We soon discovered that MAF Liberia was flat-out using its full capacity of one plane by doing 2 flights every single day of that week. When we arrived after our long stretch from Ghana, the current Liberia plane was still coming back AND doing another 3 hour flight.  It was immediately clear to us that the MAF Liberia program cannot do without a plane for long.  The team were very eager to receive OPE and had arranged for the local CAA to inspect OPE so that we could follow a seamless plan of flying back in SCO after the weekend leaving OPE ready to fly in Liberia.

During the weekend we enjoyed the company of the international staff based in Liberia. Including ourselves, we were five all from different countries: India, Finland, The Netherlands, Scotland and South Africa. I love the fact that we work in a multicultural environment, all working for the same big goal of reaching isolated people with help and hope! 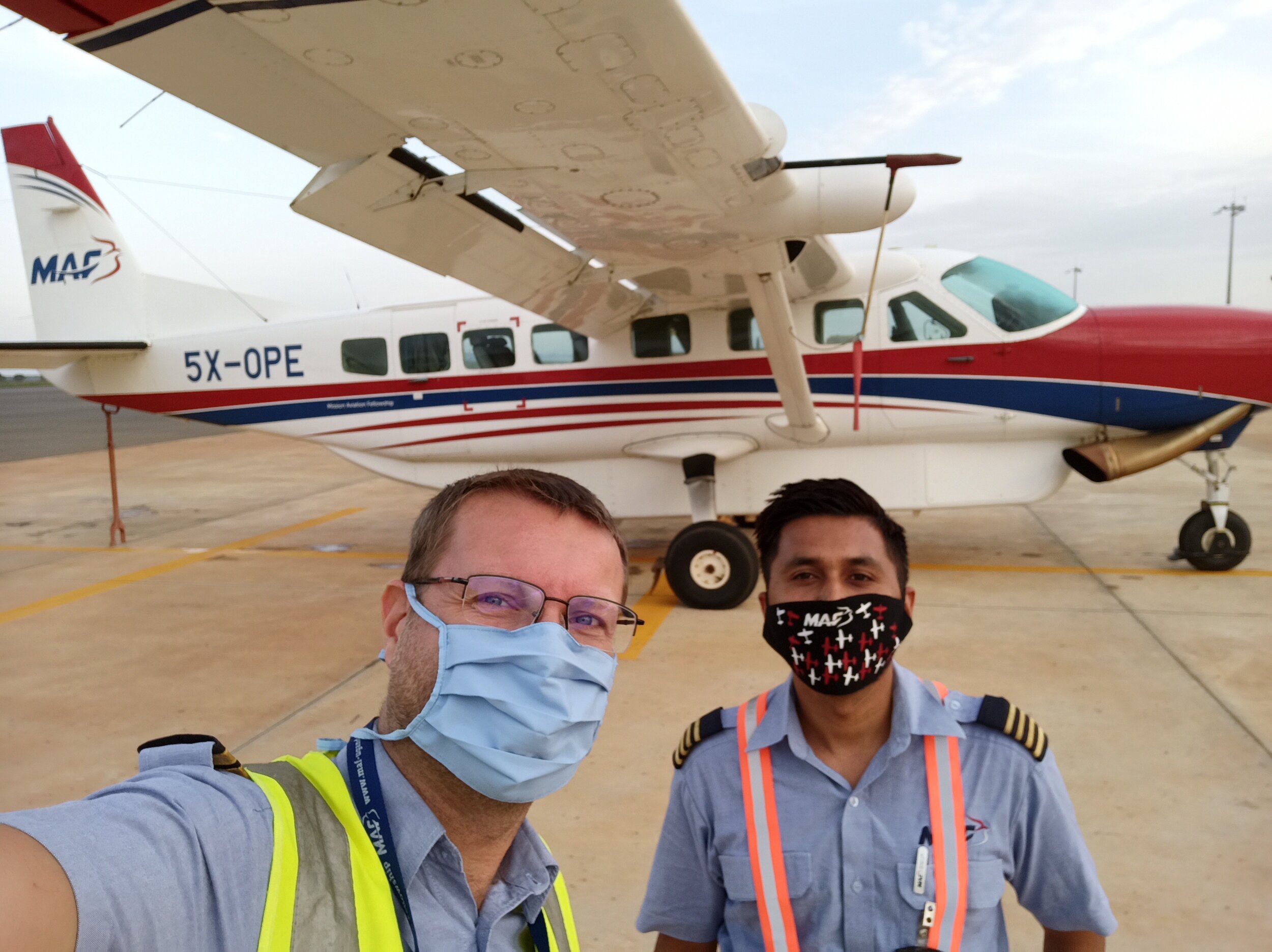 On Monday morning we had an early start to be able to get SCO ready for the big trip, which started around 11.30am and basically did the same route in reverse. Only thing was, that heading east we were going ‘against’ the sun and also ‘against’ the winds that are predominantly from the east on the latitudes around the equator. The result was that we couldn’t do Yaounde-Entebbe in one day, and had to add an extra stop in Kisangani, DRC.

On Thursday 11th February we safely touched down with SCO (or Scotty as the nickname goes), back in Kajjansi, Uganda. It was a fantastic trip, all executed according to plan, carried on the prayers of many! And the good news is that after Scotty’s maintenance is finished, it will be flown back to Liberia, and then will serve alongside OPE.

An exciting doubling of the fleet in a place where there is huge need!