As a teenager, she took flying lessons and even flew a solo flight. Betty longed for travel and adventure, and when a trusted older friend suggested that she use her flying for Christian mission work, Betty “leaped for joy at the thrilling thought of combining flying with my love for God.” 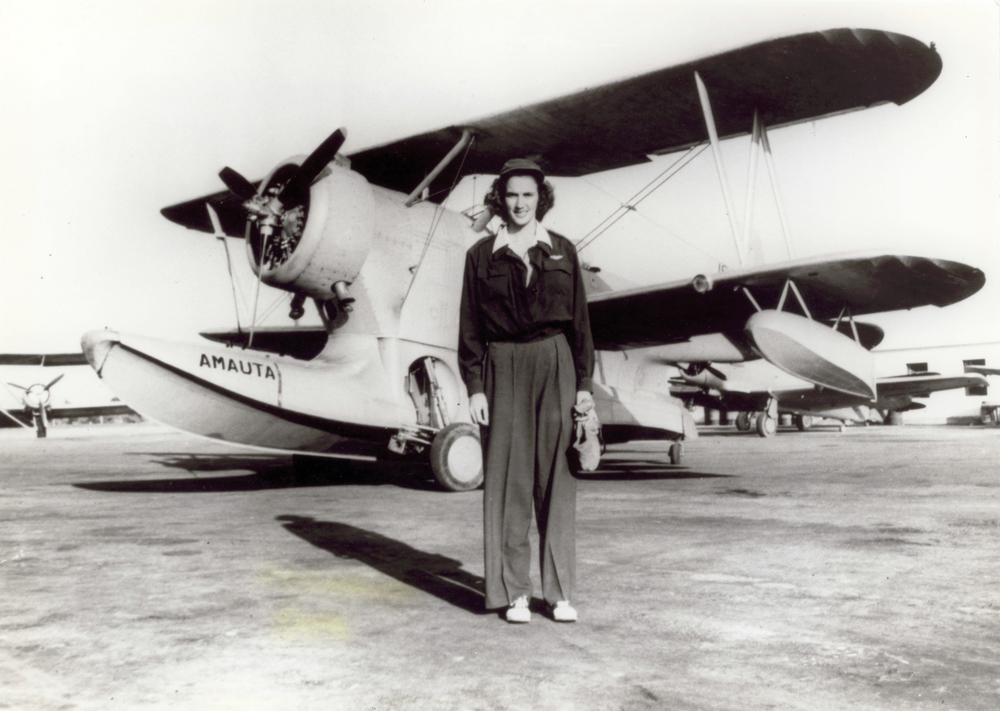 As a teenager, she took flying lessons and even flew a solo flight. Betty longed for travel and adventure, and when a trusted older friend suggested that she use her flying for Christian mission work, Betty “leaped for joy at the thrilling thought of combining flying with my love for God.”

The following is an extract from her book, Flying High. Get a glimpse of the opposition she met and her unreserved determination to face it with faith in Christ, knowing the calling he had for her.

After protracted delays, I arrived in Lima, Peru at the end of July 1946. On my flight from Mexico City to the Panama Canal Zone I spent a night in Guatemala City and flew on to Ancon on the Pacific. En Route, as frequently happens, I was recognised as a pilot and invited up to the cockpit to do some flying. I did not tell the flight crew I was a pilot but apparently someone did, or perhaps at check-in it was noted on my passport. One of the pilots has been an instructor for the WASP at Sweetwater, which made the trip somewhat of a reunion and gave a good feeling.

At Ancon I stayed in the famous old Hotel Tivoli which former President ‘Teddy’ Roosevelt had built at the turn of the century.  A room and bath cost me $2.75 and a turkey dinner cost $1.25. I had very little cash on me at the time. Our departure was delayed almost a week and I decided to skip some meals so that I would have money in hand upon arrival at Lima.

While in the Canal Zone I followed up on a call which Mr. Townsend (founder of Wycliffe Bible Translators) had suggested. I went to see an officer in charge of the Foreign Liquidation Commission’s office for Latin America. We talked about aircraft available and about the Grumman Duck which I expected to be flying soon.

He had not known my flying experience nor did he make an inquiry. His response to me, however, indicated that he placed little stock in my flying ability and suggested a pilot who could replace me. He said that he was in touch with fliers who would do the work for $750 per month plus expenses. He obviously had no idea that I was being paid $50 per month, nor that my experience fully qualified me to fly the Duck.

It has been my observation that military men who had contact with the WASP had a good attitude toward and showed respect for women pilots. Most men in uniform at that time just assumed flying was not something that women should do. Mr. Townsend and the MAF men, on the other hand, showed great confidence in my abilities. I knew that God had called me to do this work and was ready to proceed; nevertheless, it was a blow to my ego whenever I encountered people who let it be known they had no confidence in me as a woman pilot.

At the official ceremony of turning the Duck over to SIL, Mr. Townsend announced the Ducks official name, Amauta, meaning, “A wise man at the service of his people”. He concluded his remarks with the words of Christ, “I have not come to be served but to serve” (see Matthew 20:28).

I was eager to begin my assignment and went out to see the Duck the next morning. That afternoon I met Marine Corps General Ross Powell, chief of the navy air mission of the United States of Peru. The Duck had been under his command. General Powell, a marine to the very core of his being, was opposed to a woman pilot flying the plane. He thought it absurd to think of my flying the ship at all, to say nothing of me crossing the Andes with it and navigating on treacherous tributaries of the Amazon River in the Peruvian rain forest.

I left General Powell feeling very vulnerable, since I had never flown the Duck and needed to rely on military men under his command for information to learn its peculiarities. I must say, not for one minute did I consider the possibility of backing out of this assignment. Mr. Townsend expressed full confidence in me, for which I was grateful. I reminded myself that the Lord had brought me there to do that job and hence there was no reason to give in to bystanders‘ doubts about my fitness to fly the Duck, especially since I had the qualifications.

As arranged, the next day I met to confer with Lieutenant White of the Marine Corps. When I asked if he would be flying with me to orient me to navigating the ship, he said that General Powell would not allow him to do so. He, nevertheless, was of great assistance to me and was most kind. He went over the characteristics of the plane, but he left without giving me even a demonstration flight. Fortunately, I had a manual and studied it carefully.

Having served as a WASP I knew how to take initiative. The Lord blessed me with the ability to stay cool under pressure. After rehearsing all the procedures I turned on the engine and warmed it up. The sound of the roar rejuvenated my sagging spirits. I took off alone and soon found that the awkward-looking Duck was easy to fly. By the time I came down for the landing I knew I would enjoy flying the plane. That was a good start.

Betty went on to complete her assignment. She served as an MAF pilot for 16 years, flying in 12 countries and touching down in some 20 more. In the words of Chuck Bennett, President of Paraclete Mission Group and former pilot and president of MAF, “Betty Greene was…the first to fly across the Andes…the first female mission pilot and first of either gender in Mexico, Peru and Nigeria … Without a doubt, Betty Greene was the most amazing woman I’ve ever been privileged to know.”